This forum was the third in a series and a continuation of efforts to engage community and policy stakeholders in support of Governor Andrew Cuomo’s plan to end the HIV epidemic in New York State. A key component of the governor’s plan is to increase access to and uptake of PrEP among people who are at high risk of acquiring HIV infection.

PrEP implementation for adults was addressed on August 26, 2015, when the New York State Department of Health AIDS Institute (NYSDOH AI) convened a forum, attended by healthcare providers, consumers, community stakeholders, and state and local health officials, to discuss the use of PrEP and PrEP quality of care for adults in New York State. On November 18, 2015, a forum on implementation of adolescent PrEP was convened to address challenges and opportunities specific to the youth population. This forum on PrEP for women focused on identifying challenges that must be addressed to increase women’s access to PrEP and their willingness to use it to protect themselves from acquiring HIV.

Among presenters, panelists, and meeting participants, there was broad agreement that women in New York State are particularly vulnerable to HIV infection due to a mix of social, behavioral, and biological factors. In New York State, in 2015, 20% of new HIV diagnoses were in women, and nearly all reported their transmission risk as heterosexual contact [1].

In New York, women of color and particularly Black women, have been disproportionately affected by HIV. In 2015, 59% of all new HIV diagnoses in women were in Black women, who comprise only 16% of the total female population. Research in New York City demonstrated that few women know about PrEP, and very few are using this prevention intervention.

All agreed that barriers to PrEP uptake fall into three domains: awareness, attitudes, and access. 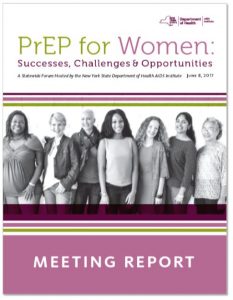 This report summarizes speaker presentations and panel and participant discussions at the first statewide forum on PrEP implementation for women in New York. This meeting was hosted by the New York State Department of Health AIDS Institute (NYSDOH AI) on June 8, 2017.

Dr. Collier is the Director of Research and Evaluation at Planned Parenthood of New York City. In this role, she conducts research to support new agency initiatives and serves as the evaluator for PPNYC’s Project Street Beat program. Kate has previously worked for the HIV Center for Clinical and Behavioral Studies at Columbia University and the NYS Psychiatric Institute, the Columbia University Mailman School of Public Health, and Gay Men’s Health Crisis. She holds a PhD in social sciences from the University of Amsterdam.

Dr. Daskalakis is the Deputy Commissioner for the Division of Disease Control at the New York City Department of Health and Mental Hygiene. Dr. Daskalakis directs the public health laboratory and all infectious disease control programs for New York City, including HIV, tuberculosis, STIs, vaccine-preventable diseases, and general communicable diseases. His division is one of the largest in the Department, employing more than 1,000 staff, managing >$350 million, and operating 17 clinical facilities. He received his medical education from NYU School of Medicine and completed his residency training in 2003 at Beth Israel Deaconess Medical Center in Boston. He also completed Clinical Infectious Disease fellowships at the Brigham and Women’s/Massachusetts General Hospital combined program. He received his master’s degree in public health from the Harvard School of Public Health. He has been a career-long physician-activist in the area of HIV treatment and prevention among LGBTQ+ people.

Dr. Diallo is an advocate in the struggle for women’s human rights and reproductive justice and the fight against HIV/AIDS, on behalf of communities of women living with HIV and those at risk of HIV and STIs. In 1989, Diallo founded SisterLove, Inc., the first women’s HIV/AIDS and RJ organization in the southeastern United States. She is a member of In Our Own Voice: The  National Black Women’s Reproductive Justice Agenda, where she advocates for sexual and reproductive justice in public health and prevention policies and programs. Diallo is a member of the Board of Directors of the National Women’s Health Network, is a founding member of the 30 for 30 Campaign for Women in the National HIV AIDS Strategy, serves on the Fulton County HIV Advisory Board and is a co-chair for the Act Now End AIDS national coalition. She was recently appointed to the National Institutes of Health Office on AIDS Research Advisory Council. Dr. Diallo holds a master’s degree in public health from the  University of Alabama at Birmingham and bachelor’s degrees from Spelman College. In 2012, Diallo received an honorary  doctorate of Humane Letters from her alma mater, Spelman College. She convenes the only national coalition of women  focused on HIV and biomedical prevention, the U.S. Women & PrEP Working Group.

Dr. Herold is Professor of Pediatrics and Microbiology-Immunology; Vice Chair for Research in the Department of Pediatrics; and Division Chief, Pediatric Infectious Diseases at Albert Einstein College of Medicine and the Children’s Hospital at Montefiore in the Bronx, NY. Dr. Herold graduated from the University of Pennsylvania Medical School and completed a residency in pediatrics, clinical fellowship in pediatric infectious diseases, and postdoctoral fellowship in herpes virology at Northwestern University. She leads a translational research program focused on understanding HSV entry and pathogenesis, the HIV-HSV syndemic, and exploiting that knowledge to develop safe and effective antiviral therapies including vaccines and PrEP. Her team is studying intravaginal rings to protect women from HIV and HSV.

Ms. Lesane has more than 30 years of experience in the following areas of healthcare: strategic planning, program planning and development, and community affairs and advocacy. Ms. Lesane has worked in a variety of healthcare settings, including hospitals, mental health treatment organizations, and community-based organizations. Her career focus has been to develop health education programs and support services to underserved communities and to contribute to the overall elimination of health disparities in NYC. Ms. Lesane is the Director of Programs at the Caribbean Women’s Health Association, Inc. (CWHA), which is located in the Flatbush section of Brooklyn. CWHA provides a variety of services throughout NYC, including HIV testing and counseling, maternal and child health support programs, immigration legal assistance, and Medicaid/health insurance enrollment services. Ms. Lesane has recently been very involved in promoting community engagement in the implementation of the Delivery System Reform Incentive Payment Program in Brooklyn.

Ms. Morne serves as Director of the NYS Health Department’s AIDS Institute, where she directs policy and program development related to HIV, hepatitis C, STDs, drug user health, and LGBTQ+ health. She has worked closely with community stakeholders in implementing the governor’s plan to end the AIDS epidemic in NYS by the end of 2020. Ms. Morne has bachelor’s degrees in psychology and social work and holds a master’s degree in education and counseling from the College of St. Rose. Before joining the Health Department, Ms. Morne directed community-based services at Whitney M. Young, Jr. Health Center, serving as clinical supervisor of chemical dependency services and program director of community outreach, mental health, and HIV services. At Albany Medical Center, Ms. Morne served as quality manager of psychiatry, behavioral health, and HIV services. She served as adjunct professor in the Sociology Department at the University of Albany for two years. Ms. Morne’s professional and clinical experience is in public health and behavioral health, particularly within communities of color.

Ms. Morill is a PrEP Specialist from Rochester, New York. For the last year and a half she has worked at Trillium Health, first as a Retention and Adherence Specialist, and now, for almost a year, as a PrEP Specialist. Trillium Health is a neighborhood  health center that specializes in LGBTQ+ services. While completing her bachelor’s degree in social work from SUNY Brockport,  Jaime spent a year in Vietnam working with veterans and victims of Agent Orange. She then came to Trillium Health where her  passion for helping others directed her at ETE 2020.

Ms. Timoney is the Director of Women’s HIV Services for the Department of Obstetrics and Gynecology at Bronx Lebanon  Hospital Center, where she has been providing obstetric and gynecological care for women with HIV infection since 2001. She has been actively involved in HIV prevention efforts throughout her career, from her role as a colposcopist for the HIV Prevention Trials Network Vaginal Microbicide Trials, to her current role as an investigator for IMPAACT. In 2016, she completed the Greater New York Hospital Association United Hospital Fund Clinical Quality Fellowship. She is currently working to implement expanded PrEP eligibility screening across the Bronx Lebanon Ambulatory Care Network. She attended the Columbia University School of Nursing and Barnard College. Before becoming a midwife, Ms. Timoney worked for many years is an artist and curator in New York City. She is most grateful to the women she has met and cared for in her practice at Bronx Lebanon.

Agenda with Links to Slides

The Conundrum of Topical and Systemic PrEP for Women: How to Deliver the Right Drugs to the Right Place at the Right Time | View Slides
Betsy C. Herold, MD, Professor of Pediatrics and Microbiology-Immunology, Vice Chair for Research in the Department of Pediatrics, and Division Chief, Pediatric Infectious Diseases at Albert Einstein College of Medicine and the Children’s Hospital at Montefiore, Bronx, NY

“Is That for Me?”: Challenging Assumptions about PrEP for Women in the U.S. | View Slides
Dázon Dixon Diallo, MPH, DHL, Founder and President of SisterLove, Inc.

Participant Discussions: Attendees will circulate through three 25-minute breakout sessions to discuss their experiences with the following key topics in PrEP implementation for women: awareness of PrEP, perception of risk for HIV, and access to PrEP. After 25 minutes of discussion in one session, participants will be directed to the next session until everyone has had the opportunity to participate in each of the three sessions. After a short break, we will gather to report out and identify priorities for policy and change.

Report Out: Successes, Challenges, and Priorities for Change
Session leaders will report out to the whole group with the goal of identifying the top 3-5 items in each of the following areas:

We are very grateful for feedback on the website and on your experience and would appreciate it if you would complete our brief survey.

Yes, I will give feedback–take me to the survey now.